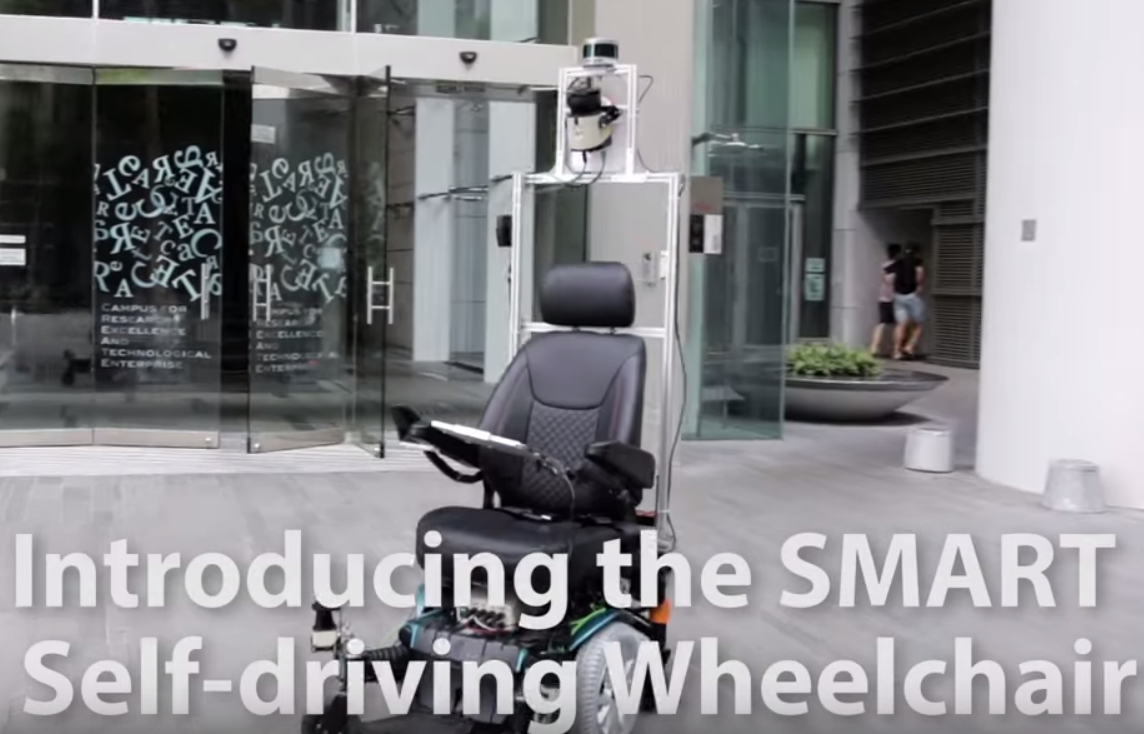 In this video, Professor Daniela Rus, SMART FM Principal Investigator and a professor of MIT’s Electrical Engineering and Computer Science department, stated that the autonomous technology developed here could be applied to the self-driving lightweight devices, such as autonomous scooters and autonomous wheelchairs. This project has been ongoing for almost a year and a half. The self-driving wheelchair aims to provide disabled people with personal mobility, increasing their ease and convenience in their everyday life. Unlike traditional or electrical wheelchairs, people do not need to focus on controlling the wheelchair during a trip. Instead, they can just hop on the self-driving wheelchair, enter the destination, and the chair will send the destination to the system developed by SMART and retrieve the most efficient path. Afterwards, it will autonomously transport people to their destinations without any further instructions.

During the trip, the wheelchair uses sensors to capture the surrounding environment, and compare what it sees with what the map shows. When the vehicle encounters obstacles and other people uncharted in the map in real time, it will react and drive around them. Dr. Rus believes this new technology would bring more flexibility and greater personal mobility to the hospitals around the world.

The following features are included in this self-driving wheelchair:

The self-driving wheelchair is not only special for hospitals, but other situations as well, such as shopping malls or amusement parks for disabled people. This could help more disabled people go out and see the world.

Since this self-driving wheelchair is an extension of the scooter, it may be interesting to take a glance of that self-driving scooter built last year.

It looks similar to the wheelchair, but more like a single-chair golf cart. Similar to the self-driving wheelchair, this scooter also has an on-board computer for control purpose and sensor to send and receive the optimized path. The system behind the wheel consists of a few algorithms to ensure its functionalities:

Therefore, besides all those properties, the wheelchair is basically an upgraded version, specially designed for narrow space, which in this scenario is the hospital.

More interestingly, SMART unified and applied the same control algorithm among all types of vehicles: wheelchairs, scooters, golf carts, and cars etc, which reduces the complexity as different systems do different things. In this case, information flow between different vehicles can be transferred easily so that people do not have to modify the algorithms due to different types of vehicles. This is exactly the ultimate goal of programming, “write once, apply everywhere.” Once this vehicle system is complete, the transportation network could spread throughout the entire country to test its performance, and maybe MIT can go to the next phase of autonomous driving. However, SMART or MIT have not released further plan to the public.

0 comments on “A Self-Driving Wheelchair”